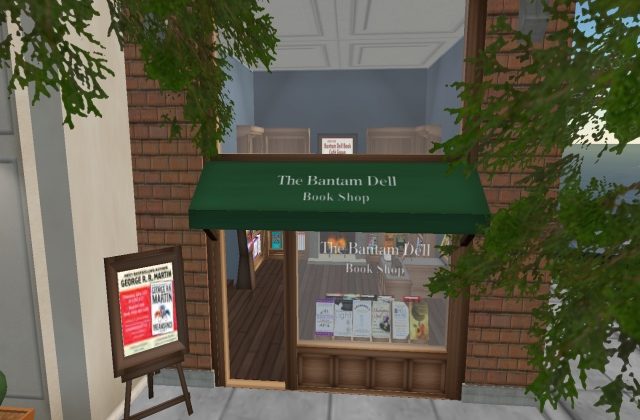 BS: While we are off to attend O’Reilly Media’s Tools of Change conference, we invited a guest writer to fill in. Ronin Kurosawa came highly recommended, though, in retrospect, we should have been more suspicious of his references. Still, we find his reporting to be thorough and excellent reading. One note, however: Ronin seems to be confused about the concept of a per diem. He seems to think it means “per word.”

For months now, the media has been buzzing with enthusiastic reports about Second Life, a virtual reality world that looks something like a video game but acts more like a business platform and social network. If you’ve heard only one thing about Second Life, it’s probably that a resident by the name of Anshe Chung earned a million real dollars in the virtual real estate market — a fact that turned her avatar into a Business Week cover girl.

Over the past year, Second Life has become a platform for everything from elaborate marketing campaigns to presidential campaigns. Businesses of all sorts are entering Second Life looking for ways they might use the simulated world to conduct real business.

Naturally, all of this media hype caught the attention of the Booksquare lady. She hired me to investigate the publishing activities taking place in this virtual world. She told me to spare no expense but also to keep my receipts. And to file a full expense report. In triplicate.

I’ll admit that I was hesitant to take this assignment — especially considering the skimpy Booksquare per diem. But, ultimately, I took the job because it seemed there wouldn’t be all that much to report on. How much publishing business activity could be happening in Second Life? As it turns out, a lot. What I discovered is that Second Life has quietly become a hotbed of activity for both publishers and authors.

This World Started With a Book

It’s not surprising that the origins of Second Life started with a book. After all, the best books are not unlike immersive virtual worlds. This particular book is named Snow Crash by Neal Stephenson. It was published way back in 1992. The novel describes the Metaverse as a 3-D virtual reality environment, very much like Second Life. And when I say “very much like,” I mean “almost identical.” So much of Second Life appears to be based on Snow Crash that Stephenson should probably bet getting royalty checks from Linden Lab, the company behind the virtual world.

In September of last year, Penguin UK became the first major publisher to enter Second Life. Appropriately, the company’s first project was a tribute to Snow Crash. Penguin placed kiosks dispensing ebook and audiobook excerpts from Snow Crash in various Second Life neighborhoods. It was a small first move, but entirely appropriate given the book’s influence on the creation of Second Life.

Jeremy Ettinghausen, Penguin’s Digital Publisher, explains, “the Snow Crash project was really an entry point for us – an obvious toe to dip in the pool of Second Life.”

Before establishing this initial presence, Jeremy spent considerable time exploring Second Life to better understand the virtual world’s culture. He explains, “Generally, I think that everyone, publishers, as well as other brands coming into Second Life, needs to spend some time in-world and develop a deeper understanding of it before leaping in.”

Penguin UK recently launched a new Second Life project, a virtual bookshelf with samplers of ten titles the publisher believes will appeal to virtual world residents. Meanwhile, Jeremy continues to explore other opportunities in Second Life on behalf of Penguin. He explains, “We don’t see SL as a quick in-out marketing solution – I think long-term engagement is needed if publishers are going to get anything from it.” It’s only natural that publishers looking to create a presence in a virtual world would immediately think about building a book store. And that’s precisely the approach Wiley and Bantom Dell took when entering Second Life.

Wiley opened its bookstore in December last year to coincide with the publication of Second Life: The Official Guide, and Bantam Dell’s bookshop debuted in March.

It’s important to note that neither bookstore sells books. Both publishers use virtual representations of books to link users to web pages with information about featured titles. In addition, the companies use their in-world locations to host events designed to appeal to the community and connect authors with their readers.

To commemorate the publication of the first official Second Life book, Wiley hosted the first in-world book release party where Second Life residents could meet and interact with the authors of the guide.

Meanwhile, the Bantam Dell shop has been the site of weekly book-related events and a couple of high-profile author appearances. First, there was an in-world reading by Dean Koontz and, more recently, an appearance by George R.R. Martin. Both authors read from their works, answered questions from the audience, and interacted with fans — in a virtual sort of way.

The Bantam Dell shop is coordinated by Beelzebubba Rasmuson, the Second Life name for Ken Wohlrob, the publisher’s Associate Director of Internet Marketing. I met with Beelzebubba the day after the George R.R. Martin event — a huge event by Second Life standards and a respectable author event even by real-life standards. During our interview, he explained how the social aspect of Second Life provides unique opportunities for publishers and authors.

“It lets fans from around the globe come together and actually ‘meet’ their favorite author, or discover writers that normally they would never learn about because they are not published in their respective country. Much like the internet and podcasting, it has great potential for unknown writers as well as well-established ones.”

Bantam Dell’s success in Second Life is primarily due to its commitment to running weekly events at the virtual book shop. The Bantam Dell location has become a popular hangout for the locals, while the Wiley store is relatively dead between book releases.

Wiley is investigating ways to branch out beyond the virtual bookstore. Margie Shustack, the VP of Marketing Operations at Wiley, tells me the company is looking at ways to better integrate with the community and is considering “a variety of promotional opportunities over the next year that may or may not involve the bookshop.”

An Island of Books Selina Greene is a co-proprietor of Publishing Village on Book Island in Second Life. In real life, she’s Sheena Dewan, Publisher and Managing Director of Vision, Vision Paperback, and Fusion Press, publishers of trade non-fiction in the UK.

While major publishers have used SL primarily as a marketing vehicle, Selina is conducting real business in the virtual world. Later this year, Vision will publish “How To Live Your Second Life” by Andrew Sullivan. The book deal was initiated, negotiated, and finalized entirely in Second Life. As far as anyone knows, this is the first book deal negotiated in a virtual world.

Selina is optimistic about Second Life’s impact on the publishing industry, and she sees virtual worlds as more than just a marketing tool. During our interview on Book Island, she told me,

“I can see SL becoming an important forum for publishers around the world to make contacts. I can see the potential in particular for translation rights and for connecting with writers and authors, probably above all. There’s a lot of writing talent in SL.”

Book Island serves as a focal point for the book industry in Second Life and an entry point where authors, publishers, and other publishing-related professionals can establish a presence in-world. Several residents have already begun collaborating on real-world book projects after meeting on the Island.

Selina tells me that Pan Macmillan, Canongate, and several independent publishers will soon join the village, which is growing so rapidly that it’s already nearing capacity.

Publishing Village also hosts various events, the largest of which is the Second Life Bookfair — a massive three-day event hosted at the village’s previous location on the mainland. The first Book Fair attracted 1,400 visitors, featured 42 exhibitors, and nearly 20 events.

The creation of Book Island has allowed Selina and her SL business partner Roman Zeffirelli to construct a 60,000-square meter virtual conference center to host the next event. It’s a sign that they’re planning for massive growth.

But Can It Really Sell Books?

The big question that publishers who aren’t yet in Second Life will undoubtedly ask is, “Can this virtual world sell books?” After all, that’s why publishers are in business.

Beelzebubba thinks it can sell books. Not only that, he believes that Second Life offers publishers a unique opportunity that doesn’t exist anywhere else. During our interview, he noted,

“… we are competing not just with other publishers for that nanosecond of a reader’s attention, but also with movie studios, music companies, and video game developers. What is interesting is that in SL, we’re actually on a level playing field with all of them. Whereas on the Internet, they have so much streamable content already at their disposal, SL allows us to create events that don’t rely on the normal avenues of delivering content.”

All this talk about new ways of interacting with consumers and leveling the playing field reminds me of the Web circa 1995. In many respects, Second Life is at the same point in development that the Web was in the mid-’90s. It’s gathering considerable attention, but it still hasn’t reached a critical mass. However, with the population of Second Life currently growing at a rate of around one million users per month, a critical mass will come soon enough.

In my next report, I’ll tell you the stories of Diana Hunter and Andrew Sullivan — two writers using Second Life in entirely different ways, each achieving incredible results that might only be possible in a virtual world.