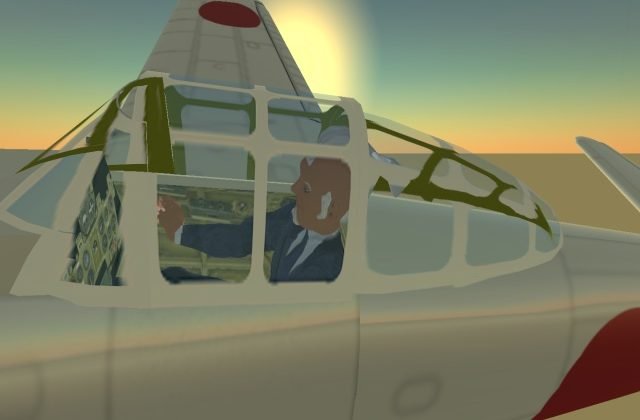 Anywhere but Second Life, the sight of a Japanese Zero zipping around the skies on Memorial Day weekend might start a riot. Not here, though. In this surreal world, a vintage fighter plane from the wrong side of the tracks doesn’t even raise an eyebrow.

I had just taken possession of my new aircraft and was jetting around Scaroth on a test flight. The plane is light, surprisingly agile, and a little too responsive. One moment I’m climbing into the sky with nothing but clouds in sight; the next, I’m zooming straight for the ocean.

Funny thing about Zeros: once they go into a nosedive, there’s no pulling back. It’s almost like they were engineered to crash — which is exactly what happened next.

I narrowly missed a nightclub called the TerrorDome and found myself submerged at the bottom of a lagoon.

Since then, I’ve crashed my Zero numerous times, and I’ve taken to telling bystanders that I’m one of those WWII re-enactors. So far, no one has asked any questions.

Second Life Is the Global Village

As I wander around the grid, I’m frequently surprised by how foreign Second Life really is — and I don’t mean foreign strange (although it usually is that too), I mean foreign international. I’m not just saying this from an American perspective because the mix of residents in Second Life is so diverse that it must feel foreign regardless of one’s nationality.

According to recent statistics, only 19% of active Second Life users are from North America. The largest national groups were Germans and Americans at 16% each. No nationality comes close to being a majority in the metaverse.

Second Life is probably as close as you can get to traveling abroad without holding a passport.

Because of this diversity, the things Americans care about don’t always mean much to the majority of residents leading their second lives. My Brazilian and Dutch neighbors in Scaroth couldn’t care less about Memorial Day, and I’m sure they’ll feel the same come July 4th.

It’s a different world here, and it reveals itself in many ways, not the least of which is how various nationalities conduct their virtual political activities.

To date, the US presidential campaigns have been incredibly sincere and surprisingly conservative. What little drama the campaign has witnessed has involved some relatively isolated griefing, disappearing campaign headquarters, and an almost obsessive need to be taken seriously by the mainstream media (and the mainstream party machinery, for that matter).

By contrast, other nationalities have pursued their Second Life political activities much more zealously:

In Europe, They Call It “Humour” 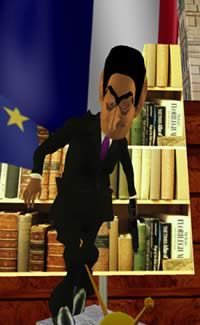 We’re also starting to see the emergence of a couple of new weapons that might be more powerful than pig grenades — satire and parody.

A Frenchman, calling himself Christophe Hugo, has quietly launched an island called Caractavitars. The island features an evolving set of tableaus designed to skewer world political figures. As advertised, Hugo wanders the island in an avatar designed to look like a caricature of French president Nicolas Sarkozy.

The island is now appearing in search results for all sorts of political-related keywords, including the names of prominent American politicians. When I arrived on Memorial day weekend, Hugo had set up a scene depicting a bald eagle upside down on a huge platter in what appeared to be a surreal picnic setting. A Weber grill stood nearby, waiting to cook up some all-American drumsticks.

Meanwhile, Hugo, in character as Sarkozy, waived a gun around while dancing on a platform built out of a huge book, numerous stacks of unmarked bills, and a television set tuned to TF1 (which I gather must be the French equivalent of Fox News). I’m positive that I’m not fully grasping the nuance of Hugo’s protest, and I’m sure our French readers will have a finer appreciation for the details.

I approached Hugo to ask about his bizarre display. He ignored me for a while before detonating an explosive device that sent me hurtling through space and into the ocean (I’ve spent a lot of time underwater these past few weeks).

In retrospect, I probably should have read his Second Life profile before asking any questions:

“What is caricature to you is reality to me.”
— CH

My avatar is in-world to display caricavatars. This is a full-time job that rarely gives him the time to chat. Enjoy your visit though.

A full-time job?! I am always surprised by the number of people I encounter who make their living in Second Life, but this is too much. I can only blame the weak US dollar and the excessive holiday time that most Europeans are given. If they were working 60-hour weeks like most Americans, they obviously wouldn’t be wasting time in Second Life mocking their newly elected president!

Hugo is developing an American Caricavatars set to launch on the Fourth of July. I can only imagine what he has in store for that project. I teleported in to look around and found myself on the southern side of the Mexican-US border. It’s open for now, but it’s only a matter of time before the minutemen move in. Better take your Linden passport just in case.

Gravel On The Move 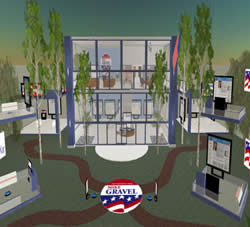 Meanwhile, the US campaigns are moving forward in much the same manner as they have all year, without a hint of satire but with plenty of intrigue surrounding campaign headquarters.

That new Mike Gravel campaign HQ I wrote about two weeks ago? It was the first officially authorized campaign HQ in Second Life, but it’s now closed. Instead, the Gravel people have moved to a new location that’s bigger and better than ever. It’s part of the nomadic lifestyle in Second Life.

Just days after the grand opening of the original Gravel HQ in Second Life, political blogger LailaLei Mathilde raised concerns about possible FECA violations related to inappropriate corporate branding. It didn’t take long before someone else pointed out that Cezary Fish, the building’s creator, is a Polish national and that his involvement might violate the FECA laws governing the activities of foreign nationals.

I discussed these issues with Gravel’s Second Life group leader, Astrophysicist McCallister, shortly after the closing of the first campaign HQ. Astro claimed that the move had been in the works prior to the Second Choices blog post, adding that Gravel’s virtual campaign takes FECA matters very seriously.

The Gravel Campaign is going to fully grasp this opportunity to discuss campaigning in-world, in regards to FECA, and other stated campaign laws. We’re breaking new ground, and we’re proud of it, but we do have to analyze every action from an RL point of view. Hopefully, we set the standard for campaigning in world.

It’s good to hear that the campaign is taking a proactive approach to FECA compliance. Lord knows what might happen if Mike Gravel were to be elected president amidst rumors that he’s in the pocket of the Polish Virtual Builders Association.

The fact that FECA issues were raised almost immediately after the first real-world campaign arrived in Second Life points to the challenge of conducting political business in a virtual world. Given the current state of the world, everyone on the planet has a vested interest in the outcome of the 2008 presidential election. There are plenty of non-US residents in Second Life ready to jump in and do whatever they can to help their candidate of choice. While the Gravel campaign is dealing with these issues today, it’s only a matter of time before the other campaigns face the same scrutiny. Gravel is taking the heat for being first.

Regardless, the change seems to have worked out well for Gravel. On my first visit to the new headquarters, it was like I’d landed in a theme park called Mike Gravel World. While the original HQ was nice, the new Pup Witherspoon-designed facility is much more elaborate and devotes even more space to issues such as Gravel’s NI4D proposal.

The new build is not without its quirks, however. Floating 700 meters in space and boxed in by transparent walls, the headquarters feels like a giant political terrarium. 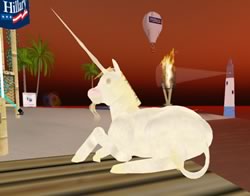 Astro tells me the walls will keep visitors from falling off the edge. It’s nice to see the Gravel campaign takes safety seriously. Unfortunately, I get the feeling some of the other campaigns aren’t so concerned. I’ve heard more than a few rumors of supporters impaled on the unicorn that greets visitors at the entry of the Clinton campaign HQ.

I plan on flying my Zero out to Clinton Island to investigate. With any luck, I’ll have the full story in a couple of weeks. If you don’t hear from me by then, assume I’m lost at sea.