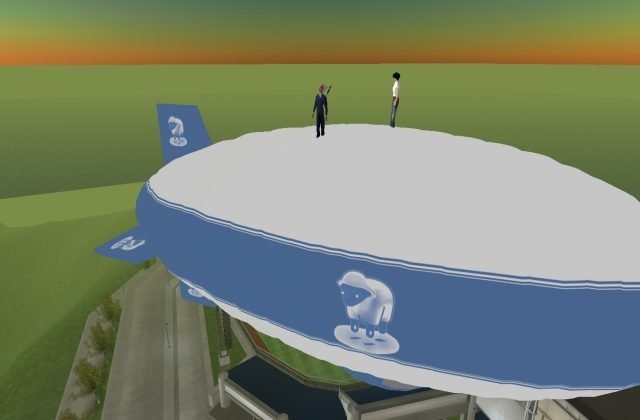 I’ve attended a surprising number of Microsoft parties over the years. I usually go for the free drinks and end up taking the free software, just to be polite. I seldom go for the egg hunt — especially a month after Easter. And yet, that’s exactly what I did earlier this evening as marketing agency Millions Of Us hosted a party commemorating Microsoft’s arrival in Second Life.

Microsoft’s new island is something of a mystery. It follows the current SL marketing trend of focusing on interesting architecture and game-like elements while downplaying any obvious product tie-ins.

The main structure on the island consists of a large meeting area and an atrium that looks something like a docking station for a futuristic blimp. Meanwhile, there’s a relatively normal-looking blimp floating a few hundred meters over the island.

The game itself is a sort of scavenger hunt that requires participants to wear a cyborg-like wrist attachment while searching for eggs. Ten eggs are hidden around the grid (as in, the entire Second Life grid). Players need to find all ten eggs, then solve the puzzle contained in each egg to win the game. Is it just me, or does this game seems unnecessarily difficult? It could take weeks to play out, and I can’t imagine anyone but the most fanatical participants will actually complete the task.

Fortunately, party attendees received a special hint to assist in finding the first egg. A hint that I will now pass along to you the loyal Metaversed reader: The first egg is located somewhere on Microsoft Island!

Unfortunately, there was no second hint.

The game, and Microsoft’s presence in Second Life, will eventually promote Visual Studio. Presumably, we’ll figure out the connection as the game progresses. Hopefully, figuring out that connection won’t be as difficult as finding ten eggs hidden around this huge virtual world.

Otherwise, the event was just like any other Microsoft party. Except for the fact that the alcohol wasn’t real and there was far more dancing. Has anyone ever danced at a Microsoft launch party?

Also, the party was limited to 55 people, including staff — that’s the capacity where avatars start getting blocked from entering. A small queue began lining up in the Microsoft Winners sim next door. Yes, you read that right, the people who couldn’t get into this party were directed to the “winners” area next door.

I spent almost 30 minutes looking around the island, under every rock and every blade of grass, but I couldn’t find a thing. Finally, I gave up and decided to get a beer in real life. Before logging out, I stopped to take a closer look at the mysterious blimp floating over the island. Apparently, that’s where the winners will be transported. Once inside the blimp, they’ll receive some super-secret special prize.

I stopped to take a photo of myself with a bottle of virtual champagne inside the blimp. I can’t imagine that I’ll get here by winning, so I might as well take a photo now while everyone else is still looking around for the first egg.

As for the super-secret prize — let’s just say that earlier in the day I happened to notice that the Microsoft Winners sim is divided into 920 separate 2-meter plots of land. Wanna make friends with Second Life natives? Try giving away free land. It works every time.

Eventually, my snooping got me ejected by Millions Of Us security. They sent me home so that I could have a real drink and write this story. Hopefully, the avatar that took my spot found the damn egg.

This article was originally published on Metaversed.com on May 11, 2007