When Newt Gingrich strolled up to the podium on the steps of the virtual Capitol Hill last week, it was almost like any other Washington press event. The differences were subtle but noticeable to the trained eye: Gingrich looked 30 pounds lighter, protesters were levitating fifty feet above the ground, and the audience was just a tad bit furrier than the typical beltway insider.

Such is the nature of politics in Second Life.

Political activists here have had difficulty bringing real-world politicians into the virtual world. Only Mike Gravel has authorized a campaign headquarters here of the current crop of presidential candidates. The other candidates have focused almost exclusively on more traditional social networks.

Meanwhile, the mainstream media has begun to pull back on its Second Life hype. Recently, glowing accounts of virtual real estate millionaires have been replaced by sensational stories of illicit gambling, deviant sex, and, worst of all, a questionable virtual economy.

If Second Life has any hope of becoming a legitimate platform for real-world politics, it’s up to the true believers to take action and make something happen.

As luck would have it, Newt Gingrich is a true believer.

Gingrich was in Second Life as part of a series of workshops sponsored by his American Solutions organization. Based on a recent Gingrich blog post and comments made during his speech, it’s apparent that he was given the Second Life Grand Tour by someone at IBM. He has all of IBM’s Virtual World talking points down pat.

Still, it should come as no surprise that Gingrich’s enthusiasm for virtual worlds is authentic. Over the years, he’s developed a reputation as something of a techno-geek. And unlike some other celebrity avatars, Gingrich is actually using Second Life. That is to say; he’s sitting at his own computer and driving his avatar around this bizarre world. Not only that, he’s been in-world on several occasions over the last couple of weeks. According to SLNN, there have been Newt sightings around the grid.

The thought boggles the mind. 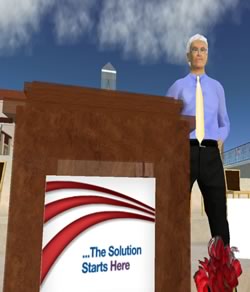 Picture, if you will, the former Speaker of the House and conservative icon, locked in his study, aimlessly roaming the Metaverse. Imagine the reactions the virtual Newt must have elicited as he stumbled around the grid in his Gingrich avatar, complete with blue oxford shirt and tie, and the name “Newt Gingrich” floating over his head.

I’m sorry to disappoint you; that avatar is not being ironic. He really is Newt Gingrich!

We can laugh about all of the scenarios Newt might find himself in as he explores Second Life without a handler, but the truth is that he is dead serious about this technology.

Gingrich told the audience that American Solutions is planning on creating a sub-division of Second Life called “Legislative Life,” a virtual world that will be accessible to 7,200 lawmakers nationwide.

As strange as Second Life can be, I’m not sure we’re ready for a virtual world overrun by flying politicians. On the other hand, the Legislative Life initiative could cut down on DUIs and other unseemly Washingtonian behavior (although it could create a whole new problem with virtual call girls, so really, it might not be an improvement).

Legislative Life is just one small part of a much larger vision. Gingrich thinks virtual worlds might be the solution to overcoming rampant partisan politics.

During the Q&A session, Gingrich told the audience:

“I’m personally very concerned that we not overdo the partisanship. With these two year long campaigns we spend the first year and a half having all of the Republicans go of to one room where they attack Democrats, and having all of the Democrats go off to another room to attack Republicans. I think you maximize all of the red vs. blue bitterness and you make it harder to get things done. 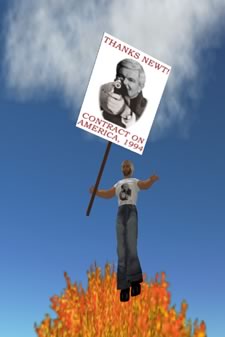 It’s almost as if he doesn’t remember being in the room the day bitter and polarizing partisan politics was invented. Some might suggest that he actually signed off on the technical specifications.

These days, Newt sounds like an elder statesman. That might have something to do with seven years of Bush and Cheney. The startling truth of the matter is that the political spectrum in the United States has swung so far to the right that Newt Gingrich now qualifies as a moderate.

Newt, to his credit, stuck around after his speech and answered every question posed. At one point, he promised to return to Second Life to meet with the SL Republicans. So, it looks like we’ll be seeing more of Newt in the future.

When the hour was complete, Gingrich vanished, leaving the audience and protesters behind. And that’s when Newt’s dream of using Second Life as a platform for a constructive bi-partisan debate was put to the test.

Here’s a brief sample of the dialogue that ensued when one of the more conservative members of the audience approached one of the protesters after the event:

Summer Seale: Ana, i have to say something to you: I support bombing Iran. I’m a feminist. I will support the bombing of Iran, Iraq, Saudi Arabia, and all other countries which suppress my sisters and force them into slavery. I don’t care what your humanitarian excuses are, I will not rest until all those misogynistic pigs who make those rules are dead, dead, dead. I hate them, I hate those rules, I hate those who enforce it. I don’t think you should *ever* comment about war or freedom until *YOUR* neck is around [sic] a noose and about to hang from a crane in the “Republic” of Iran. And until the day that this stops, I will support death, destruction, mayhem, and total fucking obliteration of this law in the world. I don’t care what your stance is and I don’t care to *ever* debate on this point.

At least Summer said, “thank you.” Maybe there is hope for a more reasonable political dialogue in Second Life.

I can hardly wait until those 7,200 legislators arrive.