Editor’s Note: The YearlyKos convention in Chicago this past weekend was a significant milestone in the history of the liberal blogosphere. The event confirmed the ascendancy of bloggers as a serious political force. All seven of the Democratic Party candidates attended to woo progressive voters. As part of our ongoing effort to bring Medialoper readers the latest news about the increasing influence of new media on the American political process, we sent the head of our National Affairs Desk, Ronin Kurosawa, to report on the event. Unfortunately, we could not send Ronin to Chicago due to certain budgetary constraints. Instead, he files this report from Second Life.

I’ve been to more conferences than I can remember, and this is the first time I’ve arrived at one without either jet lag or a hangover. The open bars at these virtual conferences don’t compare to real life. While technology is improving, I suspect this disparity will persist for decades to come.

Completely sober, I’m hovering two floors above ground level just outside of the Sears Tower. I’m not nearly caffeinated enough to attempt entering the faux building to ride the faux elevator to the faux conference room. Unfortunately, I’m already late to the Network Neutrality panel, so I decided to float in space and view the proceedings through the virtual plate glass window.

I’ve missed the introductions, but I can hear the panelists discussing all of the major issues related to network neutrality and beyond. Universal broadband – check. Personal data privacy – check. They’re discussing important issues that will shape the future of the net and, by extension, the future of our country.

Some of my fellow conference attendees seem to be equally sleep-deprived. Through the window, I can see a half dozen avatars spread around the room, several of whom are slumped over like they missed their morning Starbucks fix. This realization leads to my first moment of bonding with this community — apparently, none of us are morning people.

Eventually, I flew to the top of the building and listened to the session from the antenna tower. I’m tired of answering questions from passers-by who mistakenly think I work here. At this point, no one knows less about this event than I do. Six more cups of coffee, and then we’ll talk.

Howard Dean So Gets It 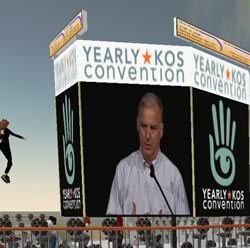 I should mention that I managed to catch Howard Dean’s keynote speech last night. It was probably as close as you’ll get to a religious revival in Second Life. Throughout the speech, the fangirls shouted “hallelujah!” and chanted, “He gets it! He so gets it!!”

Forget the Dean meltdown video that Fox News will play until eternity. Dean still has it. As a party leader, the Dems probably couldn’t do any better right now. Dean understands the challenges facing his party. He understands what they need to do to win. But, most importantly, he understands that a significant power shift is taking place and that new media is behind the change.

At one point during his speech, Dean noted: “without YouTube, we wouldn’t have a Democratic majority in the U.S. Senate.” It seems like I’ve heard that somewhere else before.

It was a lively group, and Dean was clearly preaching to the choir — but that doesn’t change the fact that he was good. Surprisingly good. And I suspect the fangirls were right. He really does seem to get it.

Blogs and the Mainstream Media

Friday morning, 11:50 am
I’m sitting in on the Blogs and the Mainstream Media session. Mike Allen from Politico has just explained why it took so long for mainstream media outlets to recognize the importance of bloggers. When bloggers arrived on the scene, they were “like the new kid at high school.” Which is to say that they were “geeky and dressed funny.” Mind you; he’s saying this to a room full of people in Chicago. If he thinks bloggers dress funny, he should spend some time in Second Life. As excuses go, this one is a head-scratcher.

While the media has played up the fact that all of the Dem candidates are here this weekend, the real story is that the mainstream media people are here too. Traditional journalists are finally coming to terms with the fact that political bloggers aren’t going away.

In the past, print journalists have blasted bloggers as amateurs in pajamas (an insult that has often made me wonder if Journalism schools offer “Dress for Success” courses as part of their curriculum).

Friday afternoon, 12:20 pm.
Real-life has intruded on my virtual conference experience. A possibly rabid beagle just cornered the mailman in my front yard, causing me to miss the last 10 minutes of the Blog vs. MSM panel. This might be how they do things at US Postal Service conferences, but it’s not what I expected from YKos.

A Break from the Action 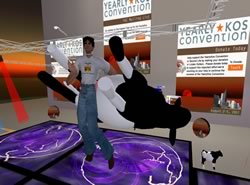 One of the advantages of attending an event like this in Second Life vs. watching the web video is that you have a chance to meet fellow conference attendees and interact with them in real-time. With that in mind, I fly over to the registration center, where organizers have set up an area for socializing.

I immediately notice that a man floating 20 feet above a dance floor appears to be wrestling with a cow. Red laser dance lights are shooting through the cow, giving the appearance that the guy is doing some real damage. I begin to wonder if maybe there’s a Kos BBQ planned for later.

I ask a nearby attendee if I’m seeing what I think I’m seeing — she confirms that I am.

Finally, I determined that this was a good thing. If we don’t fight the cows in Second Life, we’ll fight them here at home!

I briefly attempt to make small talk, but as luck would have it, I’m just not very good at small talk. So finally, I decide I’m through for the day. It’s time to get something I can’t find anywhere in Second Life. A real beer. 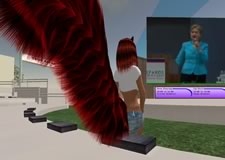 Late again. For some reason, I’m not getting the schedule updates on time.

Hillary looks surprisingly relaxed as she takes questions from a room full of people in Chicago. The Second Life crowd is receptive as she talks about national transportation policy, universal health care, and universal broadband. This may be the most likable I’ve ever seen, Hillary.

I can’t help but notice that none of the Hillary Clinton Second Life group organizers are attending. It’s odd considering that bringing Hillary into Second Life is the group’s holy grail. And here she is simulcasting an event live in SL! Organizers have set up microphones that deliver Second Life questions directly to the Chicago sessions. You’d think that group leaders Padlurowncanoe Dibou and King Zuhal would be all over this event. If for no other reason because it’s a perfect opportunity to reach SL users who aren’t aware that Clinton has a group of supporters in-world.

I try IM’ing Dibou and Zuhal for a comment but get no response. They are still unhappy about my reporting that their group violates FEC regulations. I can’t help but think they’ve missed an enormous opportunity here.

Saturday morning, 11 am
The Presidential Leadership Forum is the main event. It’s the YearlyKos version of a Democratic candidate debate, except instead of questions from YouTube, the questions are from bloggers.

When asked if they would appoint an official White House blogger, only two candidates are willing to commit. Edwards indicates he’d hire his wife Elizabeth, and Gravel says he’d do the job himself.

Gravel asks, “Why shouldn’t a president write his own blog?”. Given the current officeholder, I can probably come up with dozens of reasons.

It’s all going well for most candidates until Hillary floats a “lobbyists are people too” trial balloon. Her comment is not well received. First, the audience boos loudly, then Edwards and Obama take turns pouncing.

Shortly after Hillary’s lobbyist gaffe, the video feed cuts out in Second Life. First, there’s some chatter at Netroots Stadium about the reliability of Second Life, then the video feed returns. Weirdly, Hillary seems to be hanging upside down like a bat! Up to this point, there’s been some grumbling amongst Second Life attendees that the real-life conference has hardly acknowledged the virtual conference. I wonder if Clinton is trying to cover for her mistake by playing to the Second Life crowd. Or maybe she’s planning on using the old “I didn’t know what I was saying, all the blood rushed to my head” excuse. Regardless, we’re all startled to see Hillary take such an extreme position.

I finish watching the upside-down debate. It’s somewhat dizzying. At one point, I try to turn upside down myself without much luck.

Saturday afternoon, 1 pm.
Immediately following the debate, the breakout sessions continue for the remaining candidates. Unfortunately, a technical glitch at the event brings down most video feeds in-world. As a result, only the Edwards session is broadcast. I alternate between watching the Edwards session in SL and the Obama session on the web. Both candidates do well at their respective sessions, but the multi-tasking between the competing video feeds leaves me wondering who said what.

I noticed while watching the Obama simulcast that the level of comment on the open website is inferior to the commentary that’s been going on in the world throughout the Second Life event. I attribute this to the fact that the Second Life event costs money and requires a substantial amount of effort to attend. Even a troll with $25 to burn isn’t likely to jump through the hoops involved in creating a Second Life account for an opportunity to be an ass at a virtual convention. There are far easier and cheaper ways to be an ass on the web.

Hungry, I break for lunch.

Saturday evening, 5:00 pm
The turnout for Markos’s closing keynote is good. Most of the attendees in Second Life are enthusiastic about their experience and the chance to interact with like-minded people.

A few newcomers indicate that they’ve had more than their share of challenges learning the ropes in Second Life. However, we all agree that Second Life can have a steep learning curve, and I suspect that might be a significant barrier to mainstream acceptance of virtual conferences.

Eventually, the program starts, but instead of Markos, we’re treated to the routines of a couple of liberal comedians. The crowd in Chicago seems to find them amusing (or maybe it’s a laugh track), but they don’t play well in Second Life. I can already hear comedians of the future lamenting, “they loved my act in Chicago, but I bombed in Second Life.” 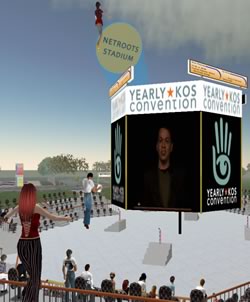 Finally, Markos takes the stage, and it’s like a religious revival all over again. He thanks the crowd and the community, then he pays his respects to community leaders who passed away this past year. Markos then spends some time recounting the tremendous impact the community has had on the political process over the past couple of years.

Next, Markos drops the bombshell. This is the last YearlyKos convention ever. Next year’s event will be called Netroots Nation. The name change is intended to reflect that the movement has grown well beyond the DailyKos website.

Regardless of what they call the event or the movement, I suspect there’s no turning back — for either the media or the candidates. As Dean noted in his keynote, new media is having a substantial and permanent impact on the political process in America. As Terrance McKenna would say, “business, as usual, is no longer on the menu.”