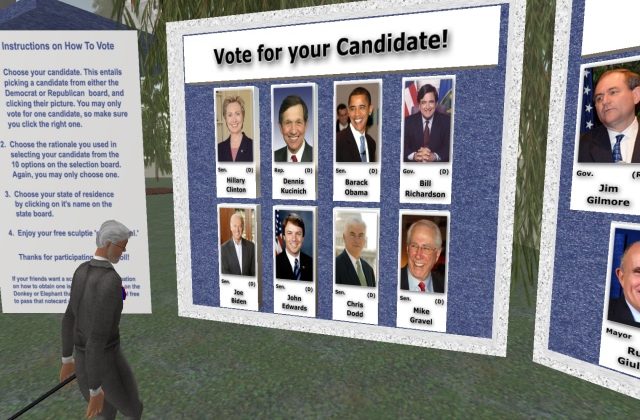 When former Senator Mike Gravel opened his campaign headquarters in Second Life last May, he became the first U.S. presidential candidate to officially campaign in-world. Although the 2008 presidential race is turning into a watershed moment for the social web, most candidates have expressed no interest in using virtual worlds to reach voters. However, that hasn’t stopped the Gravel campaign from expanding its efforts in Second Life.

Gravel is now using his virtual headquarters as a launching pad for one of the most important strategic tools in any campaign — polling. This may not seem newsworthy on the surface — other political groups are already conducting polls in Second Life. The difference here is that the Gravel polling center in Second Life represents the official campaign’s ONLY polling effort anywhere in the world – real or virtual. 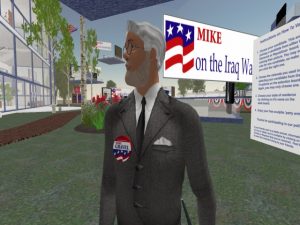 I stopped by the Gravel headquarters to examine the new polling system and find out what information the campaign hopes to gain from polling residents of a virtual world. In-world campaign director Astrophysicist McCallister (a real-world Gravel campaign staffer) demonstrated the new system and answered questions about its strategic value.

The polling is pretty rudimentary at this point. Residents are asked to choose a candidate from a list of Republicans and Democrats, indicate why they chose the candidate, and indicate which U.S. state they live in. The state information allows the campaign to segment responses and filters non-US residents.

To call this a minimalist approach to polling would be an understatement. However, McCallister tells me the campaign will expand the system to gather more data in the future.

I asked McCallister what sort of information the campaign hoped to gain from polling residents of a virtual world — after all, a survey of this sort gathers almost no meaningful demographic data about respondents. It’s hardly a scientific approach to polling.

McCallister told me, “the goal is to gauge the sentiments of Second Life residents living in, and hopefully registered to vote in, the United States.”

Given the relatively small number of U.S. residents active in Second Life, I expect the poll will produce what statisticians might refer to as a “statistically insignificant sample size.” Regardless, McCallister explained that “the National campaign is taking the data, after we process it, and analyzing it mostly as they would any other poll.”

Of course, this polling experiment is driven by money — or rather, a lack of money. In the U.S., the political process is driven entirely by money. While new media provides candidates with low-cost exposure to a national audience, professional polling is still expensive. Gravel intends to explore other options, no matter how unconventional they may seem.

This approach to polling makes more sense when you consider the candidate. Other campaigns (the ones that can afford scientific polls) frequently use polling data to determine what issues their candidate should be talking about and even what opinions their candidate should have on specific issues. Gravel isn’t that sort of candidate. He already knows his issues, and it’s unlikely that poll results will sway him or have an impact on his stump speeches.

McCallister does concede that the Second Life poll is just a first step and that the campaign will likely expand its efforts to include other avenues — most likely the web polling. But, for now, the campaign is focusing on gathering data in Second Life.