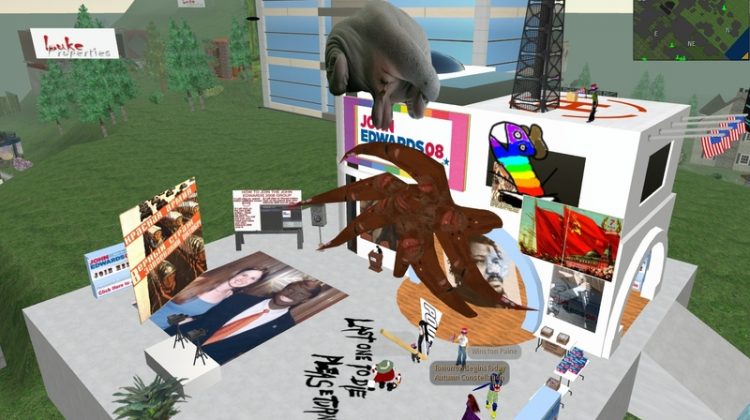 My first Medialoper assignment, and I’ve already missed a deadline.

Lopy e-mailed me last night to remind me that my story must be filed no later than 5 a.m. By 8 a.m., my voice mailbox was full, and I was ignoring Lopy’s frantic DMs. The general election is 18 months away. So why the hell do I have a 5 a.m. deadline in April of 2007?

For the record, Linden Lab performed a major upgrade yesterday, and the grid was down much longer than anticipated. On top of that, I’m in the process of setting up a compound deep in one of the most remote regions of Second Life. My hut is located on the Eastern edge of the universe (literally) and is surrounded by water as far as the eye can see (at least until a casino or strip club moves in next door). It’s the perfect place for me to focus on covering a campaign as strange as the 2008 presidential race is shaping up to be. Of course, Lopy’s ludicrous 5 a.m. deadlines are no help at all.

All the leading Democratic presidential candidates have headquarters in Second Life. The media coverage of these campaigns has been muddled, skeptical, and occasionally mocking. For reporters who can’t tell the difference between a virtual world and a video game, there’s no apparent reason for the campaigns to be here. Those same reporters overlook that presidential campaigns are already a game, and moving that game into a virtual world full of sex-crazed furries and flying penises is a logical progression in the already weird history of American politics.

The part I don’t understand is how professional political consultants are allowing any of this to happen. In an era where consultants seemingly control every minute aspect of a candidate’s message and carefully scripted campaign events, Second Life is like the wild west. Nothing about Second Life is predictable or controllable.

On the one hand, the consultant class must know the risks involved in bringing their campaigns into a world ruled by anarchy. But, on the other hand, they don’t want to miss out on the next big thing.

New media has had a remarkable impact on the political process over the past five years. For example, blogs significantly influenced the 2004 US presidential election and will continue to be a vital force for the foreseeable future.

It’s easy to forget that back in 2003, many were skeptical about Howard Dean’s use of blogs and the internet to organize his campaign. These days, Dean looks like a trailblazer and a visionary. Never mind the fact that he was soundly defeated. You only have to look at McCain Space and My.BarackObama.com to realize that Dean’s use of the internet forever changed the way American presidential campaigns are run.

Then there’s YouTube. The video-sharing site played an unexpectedly massive role in the 2006 mid-term elections. George Allen might be the Republican front-runner right now if it weren’t for YouTube. He’d almost certainly still be in the US Senate. YouTube is what they call a game-changer.

While Blogs and YouTube will continue to wield increasing influence on the political process, 2008 will mark a rise in the importance of social networks as a campaign tool. This is an evolution of the work the Dean campaign pioneered. Sites like My.BarackObama.com are grass-roots organizing machines. For supporters, they provide a way to feel connected with their peers around the country and an effective way to organize locally.

As for the media (including Medialoper) focusing on furries and other fantastic creatures, well, sometimes it’s easy to forget there are real people behind each avatar. Many of those avatars are also registered voters. With that in mind, running campaign events in Second Life doesn’t seem like such a far-fetched idea.

The fact that candidates seem eager to embrace new media opportunities is a classic example of campaigns doing whatever it takes to reach out to voters wherever they may be.

The move into Second Life is not without risks, of course. For example, the John Edwards campaign was roughed-up almost immediately after opening its headquarters.

First, a carbon copy of the Edwards campaign headquarters popped up next door — except the group behind the cloned building was supporting television psychic John Edward for president. Surprisingly, the Edwards campaign was not amused. That’s problematic for Edwards because campaign organizers need to have a sense of humor if they expect to last long in Second Life.

The doppelganger campaign HQ was a minor nuisance compared to what came next. First, Fox News did a fair and balanced hatchet job on the Edwards Second Life campaign; then, the building was defaced by vandals (on the plus side, there was a 50-50 chance the vandals might have hit the wrong Edwards building). The ensuing media coverage was not exactly what you would call positive.

The Edwards campaign eventually moved its headquarters to a private island — the Second Life equivalent of a gated community. Edwards may be trying to position himself as a populist candidate, but in Second Life, he’s a private island guy all the way.

Le Pen security forces responded with push guns, whimsical digital weapons that tossed bodies through the air “like rag dolls,” according to one witness. Protesters fought back with pig grenades, firing fat pink porkers that exploded in neon pink splatters. When the shooting ended, Le Pen’s headquarters lay in ruins, deserted by staff and guards.

There’s a valuable lesson here for anyone with serious political aspirations. Make sure your Second Life headquarters can withstand attack by pig grenades — or grenades made of any other barn-yard animal, for that matter.

Lopy has been pinging me incessantly for the last 45 minutes, so I need to wrap this up quickly. I’m under far too much pressure, given my limited compensation. Medialoper paid me 1000L to cover the entire campaign. That money is long gone — spent on a submarine! I admit I could have bought the cheaper model, but the invisibility cloaking and extremely sophisticated weaponry are key to covering this campaign the way it must be covered. I know the submarine may sound like an extravagant expense, but if the French pig grenade incident is any indication of what’s to come, I’ll need all the help I can get.

The point I’m trying to make is that I spent my entire advance on a piece of highly sophisticated equipment that is critical for me to get the full story. It would be a shame to sacrifice Medialoper’s campaign coverage because Lopy (or the cheap owners backing him) can’t see fit to provide me with adequate cash to get the job done right.

If you care about the future of democracy, e-mail Lopy today and tell him to wire me more Linden – pronto!